Buildings of the Legislative Assembly 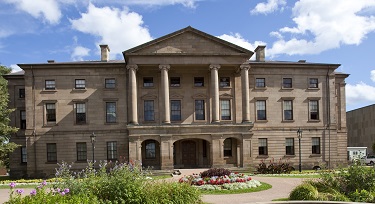 Province House is the permanent home of the PEI legislature, which has met there since 1847. It is the second oldest active legislative building in Canada. More information on this important building is available at the History of Province House. Province House is also a National Historic Site, celebrated as the 1864 birthplace of Confederation. It is located at 165 Richmond Street, in the middle of Queen Square. 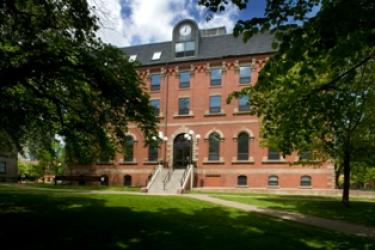 Construction of the Honourable George Coles Building, then known as the Law Courts Building, began in 1874. It was designed by local architect Thomas Alley. The Supreme Court of Prince Edward Island first met in the building on January 11, 1876, and continued to do so until 1976, when the building was severely damaged by fire. A new court building was constructed near the Charlottetown waterfront and the Law Courts Building was repaired and renovated to house offices and the Public Archives of Prince Edward Island.

The building was renamed the Honourable George Coles Building, after the first premier to lead Prince Edward Island under responsible government. Hon. George Coles was also a Father of Confederation.

The building is Italianate in design, which was popular with architects in the 19th century. Learn more about the Hon. George Coles Building. 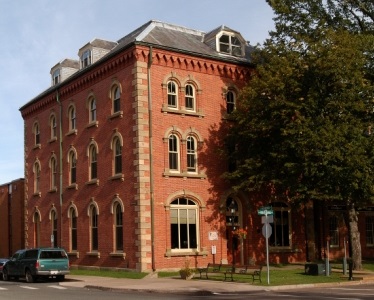 The J. Angus MacLean Building houses the Legislative Assembly's Library and Research Service, Hansard Office, Office of the Information and Privacy Commissioner, and the Legislative Counsel Office of the Department of Justice and Public Safety. It located at the corner of Richmond (180) and Great George (94) Streets.

Construction of The J. Angus MacLean Building, originally known as the Union Bank Building, began in 1872. The land on which the building is located once belonged to Lieutenant Governor Edmund Fanning, and later to Member of Executive Council/Colonial Secretary Henry Haszard. Before the building was built to house the Union Bank, a small flour and meal market operated on the site.

Established in 1863, the Union Bank was one of the first banks to operate in Prince Edward Island. The Union Bank building was built during a successful period for the bank, and its proximity to the legislature was intentional. However, involvement in the construction of the PEI Railway led to financial difficulties for the bank, and twenty years after its establishment it merged with the Bank of Nova Scotia, which used the building until 1921. The provincial government bought the building in 1939, and renamed it after former Premier J. Angus MacLean in 2002.