2014 Recipients of the Medal of Merit 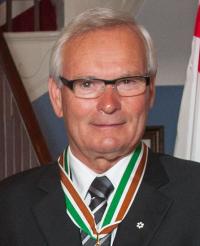 Business acumen should not be restricted solely to ensuring a shop runs well. That ability ought to be turned outwards for the betterment of society, and this trait is found in those who possess a sense of community. H. Wayne Hambly first set out on his own over forty years ago, beginning with apartment buildings before branching out to include mini-home parks, a furniture store and recreational vehicles as part of his entrepreneurial enterprise. As he successfully moved into new ventures, Hambly won well-deserved recognition and accolades from such groups as both the local and international Rotary, the Chamber of Commerce, and the Recreation Vehicle Dealers Association of Canada. He has served on many business boards, as well as on the boards of Junior Achievement of PEI, United Way, Holland College Foundation, Heart and Stroke PEI Provincial Campaign, Queen Elizabeth Hospital and Spring Park United Church.

Apart from receiving numerous industry awards, in 2007 Hambly was a co-recipient, with his wife Wilma – endowed with the Order of Prince Edward Island in 2009 – of the Red Cross Humanitarians of the Year award. Two years later Charlottetown Mayor Clifford Lee presented both Hamblys with his Citizen and Recognition Awards for their involvement as volunteers and for their business skills. For twenty years, the same energy Hambly put into his businesses has also been funneled into The Fathers of Confederation Memorial Buildings Trust which operates PEI’s Confederation Centre of the Arts. This is not simply a provincial role or concern, but one that helps shape how PEI is perceived in the national and international art and performance worlds, with the continuing success of the Centre absolutely vital for the growth and enrichment of our artistic and business communities, as well as for our sense of pride in our performers, painters, dancers and technicians. In addition, Hambly has assisted with establishing and maintaining the prestigious Symons Medal and Lecture on the State of Canadian Confederation, an annual series of talks that features wellknown speakers from all over who address the current state of Canada.

As one figure describes this energetic and civic-minded citizen, Hambly provides a “steady and enthusiastic hand at the helm” of many ventures. For his contributions to the economic and cultural life of our province, which has earned his appointment this year to the Order of Canada, H. Wayne Hambly is a worthy recipient of the Order of Prince Edward Island 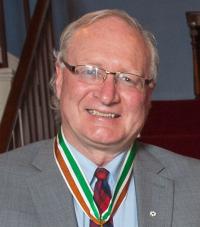 “Education has for its object the formation of character,” believed the philosopher Herbert Spencer. A consideration of the career that H. Wade MacLauchlan has had at Dalhousie Law School, the University of New Brunswick and, most notably, as president of the University of Prince Edward Island from 1999 to 2011, with his background in law and public administration, seemingly would indicate that his character has been formed by experiences found within  the walls of these institutions. Yet a person brings into higher education a character partially molded by relatives and the environment. MacLauchlan comes from a family with a history of community service, and this civic inheritance has found its outlet in university settings throughout the world. His scholastic works, his advocacy for learning, his engagement with local, regional, national and international entities and issues, and his practical skills in writing, diplomacy and fundraising, would fill pages.

Even as we keep in mind these attributes, it may be best to focus on the contributions MacLauchlan has made to the development, expansion, enrichment and international reputation of our university. Student enrolment from across the world has increased, infrastructure has grown, new areas of research and expertise have opened up, talented professors from all parts of Canada and from other countries have embraced its ethos, and UPEI has been positioned close to the front of the mind of those seeking to pursue excellence. MacLauchlan has been recognized repeatedly for his untiring efforts in education by being named a Member of the Order of Canada in 2008, and in 2010 receiving the IPAC Award for Excellence in Public Service. He has served on numerous boards and committees, coordinated extensive and useful research projects, Chaired the Georgetown Conference on the revitalization of Atlantic Canada’s rural communities and, most recently, authored a biography of a former PEI premier, Alex B. Campbell. <

Of this multifaceted educator and administrator, let us keep in mind these words of Thomas Carlyle: “The great law of culture is: Let each become all that he was created capable of being.” MacLauchlan has invested himself in the improvement of higher education so that every student can realize his or her potential. His remarkable achievements, in partnership with others, in every aspect of his professional life, particularly as they relate to UPEI, are abiding contributions to the social, economic and cultural life of our province that fully justify the awarding of the Order of Prince Edward Island to H. Wade MacLauchlan. 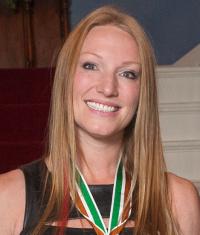 Life has speeded up considerably in the last two decades. We communicate with
people around the world, we receive mail in a few seconds, and we follow those we admire in real time. In sports, as in life, the pressure is intense to be quicker, and many times the only thing separating first place from every other spot is a fraction of a second. In an ever-changing environment, professional athletes have to make up their minds, adjust their strategies and adapt to unexpected conditions speedily and with precision, or else their years of training will be for naught. Gaining or losing an instant in a competition may determine if one takes home gold, silver or bronze, or nothing at all.

Heather Moyse is a prime example of an Islander who has excelled in her chosen field in a short span of time and whose commitment to athletic excellence reaches back to her days in high school where she competed well in track and rugby. Continuing this run of success, in 2002 she was inducted into the University of Waterloo Sports Hall of Fame, and, in 2010, in what may be a unique instance, earned the title Female Athlete of the Year in two provinces. Of course, the highlight of her professional career – so far – is her gold medal triumphs in the bobsleigh events in the Winter Olympics of 2010 and 2014. None of these achievements came without effort, but if prowess appears natural, then the practice, and the strain endured while preparing, can be overlooked. Accordingly, the recognition of Moyse’s contribution to the cultural life of our province through the awarding of the Order of Prince Edward Island takes into consideration not just her moment on the dais but her innumerable hours in gyms, on fields, on her own and as part of teams.

Pindar, an ancient poet who often wrote of Olympic events, said, “gold, like a gleaming fire by night, outshines all pride of wealth beside.” Awards are given to honour the expenditure of skill and strength; a medal easily obtained does not possess the same lustre as one that requires the demonstration of perseverance and discipline. For her career as an athlete and outstanding Olympian, and for her charitable work – achievements we are proud to see in one of our own – that reflects, in part, the nature of her birthplace, Heather Moyse deserves the Order of Prince Edward Island.