The History of Province House 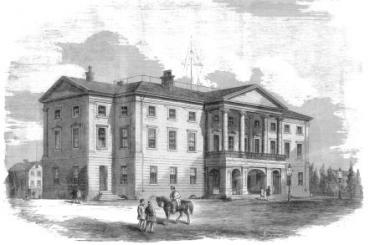 Prior to the construction of Province House, or the Colonial Building as it was originally called, PEI's Legislature met in homes, taverns and, for the three preceding decades, in the Plaw Building, which also housed the Court House. In 1837 Lieutenant Governor Harvey noted that Charlottetown lacked a solid and well constructed edifice for the deposit and safe custody of public records. He set aside £5,000 for the construction of a building that would house both the Legislative Council and the House of Assembly, as well as offices and storage for public records. Later it was decided that the Supreme Court would also be given space in the building, and a further £5,000 was assigned to the project. A public design competition was held, and builder Isaac Smith's design won. He also oversaw construction, which began in 1843.

Province House was built of stone to make it more resistant to fire, with brick vaults to house records. Contracts for labour and materials were awarded to Island businesses, with the exception of the stone used for the exterior walls, which came from Nova Scotia. The beginning of construction in May, 1843, was marked with a parade, music, speeches and the laying of a cornerstone by Lieutenant Governor Sir Henry Vere Huntley. The finished building comprised a cellar and three stories; a central staircase divided each floor into east and west corridors, with offices on north and south sides. Larger rooms such as the Legislative Council Chamber and House of Assembly on the second floor, and the Supreme Court on the first floor, were located at the corridors’ end. The legislature first met in the Province House on January 26, 1847, and the finishing touches were completed in 1848. Province House was built in the Classical Revival (or neoclassical) style and is comparable to public buildings in other colonies of the time.

The creation of Province House as an idea is inherently connected to the concept, struggle for, and achievement of responsible government, which came in 1851.  It was a physical embodiment of the shift of political responsibility from the Lieutenant Governor, who resided in Government House (Fanningbank) to the House of Assembly, which met in Province House. Province House was important to Islanders “both as a measure of the progress and sophistication of industry and a visible symbol of its independence as a separate British colony.” Since control of finances came with responsible government, Islanders also benefited from contracts for maintenance and a new showcase for their products, such as furniture. This early period of Province House also saw it fill with new departments and an increase in Council and Assembly membership, from twenty-four to thirty.

Province House was also the social center of Charlottetown in the mid-nineteenth century, and as such was used as the location of banquets and balls in honour of visiting dignitaries. The following excerpt from the July 12, 1859 edition of The Examiner describes the fête held in honour of Crimean war hero General Sir W. Fenwick Williams:

Shortly after nightfall the legislative chambers and the library room in the Colonial Building were brilliantly lighted - new and improved gaseliers having been introduced for the occasion - and between 8 and 9 o’clock were crowded with a gay and happy assemblage.The council chamber was used as a drawing room, and looked exceedingly well, not merely in the blaze of gas light, but in the blaze of beauty which it presented on that evening. The library room was tastefully filled up for dancing, and from a temporary orchestra several violins discoursed such music as the devotees of terpsichore most delight in - quadrilles, waltzes, polkas, shottisches and reels following each other in rapid succession...

...there was more than the average number of very pretty girls, dressed in the gayest and the latest fashions, with all the advantages of expanded skirts and hoops, - and who, by their elaborate and tasteful toilette, shewed [sic] that they did not subscribe to the poet’s theory, that “beauty unadorned ’s adorned the most.”

At 12 o’clock, supper having been announced, the members of the committee, each distinguished by a crimson rosette on his breast led the way to the splendid room used for the House of Assembly, in which all the available space was occupied to the greatest advantage in the setting of tables for the accommodation of the numerous guests.  One long table extended the whole length of the room from east to west, and seven others branched out from it across the room, running north and south.

The viands were of the choicest description - embracing every variety and every luxury; and although about 260 persons partook of them, the caterers, Mr. and Mrs. John Murphy, left a wide margin in providing the feast, and had stores ample enough for the entertainment of 500 persons.  The champagne was in great abundance, and was so generally patronised [sic] that the numerous decanters which dotted the tables remained unrelieved of the other sparkling juices of the grape.

Province House thus was a very import social venue of the time; indeed “nothing less than the dignity and worth of Prince Edward Island were considered to be at stake in these public receptions so that no money was spared to make the event impressive."

One of the most important events that ever took place at Province House was the Charlottetown Conference of September 1-9, 1864. The meeting was the first of a series of meetings that would ultimately lead to the Confederation of Canada in 1867, making Charlottetown the Birthplace of Confederation. However, the original intent of the conference was to discuss a purely Maritime Union of New Brunswick, Nova Scotia and Prince Edward Island. In the spring of 1861, resolutions were passed in the Legislatures of Nova Scotia, New Brunswick and Prince Edward Island advocating a conference and Charlottetown was selected as host. Delegates from Upper and Lower Canada (united as the Province of Canada) heard of the conference and attended in hopes of widening the union beyond the Maritimes. After the Charlottetown Conference and conferences in Quebec and London, New Brunswick, Nova Scotia, Upper Canada (Ontario) and Lower Canada (Quebec) formed the Dominion of Canada in 1867. Prince Edward Island joined Confederation in 1873.

The 1920s marked the first attempt to return a part of Province House to how it looked at the time of Confederation. The Executive Council Clerk overhauled the Legislative Council Chamber to restore its Confederation-era appearance, with the intention of making it a shrine to the nation’s history. Further extensive renovation took place in the 1930s, but beginning in the 1950s the cost of further repairs necessitated requests for federal assistance.  In 1974 an agreement was struck between the provincial and federal governments for assistance in the maintenance of Province House. Province House had been designated a National Historic Site in 1966 and by the 1970s visitors were causing much of the wear on the building. This helped to convince the federal government that its assistance was in order. At the same time, Islanders did not wish to give up ownership of their legislative building. Therefore, the provincial and federal governments entered into an agreement in which Province House would continue to be owned by the province, but leased for development by the federal government via Parks Canada for 99 years. In the years 1979-1983, restoration work was undertaken on Province House to return it, as much as possible, to how it might have appeared during the Charlottetown Conference of 1864.

Quotes, except where noted, are from:

Cullen, Mary. “A History of the Structure and use of Province House, Prince Edward Island 1837-1977". National Historic Parks and Sites Branch, Parks Canada. 1977