Symbols of the Legislative Assembly

Symbols play an important role in all public ceremonies. In parliamentary proceedings they often serve to remind us of historic struggles of people against the arbitrary rule of monarchs. They also serve to signify the serious responsibilities of people in elected office.

The symbols of the Legislative Assembly represent the history and traditions of Prince Edward Island's rich parliamentary heritage. 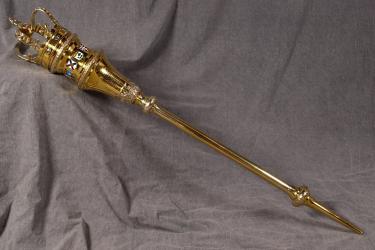 A parliamentary Mace, originally the symbol of the authority of the Crown, is now widely recognized as symbolic of the authority of parliament and the Speaker, with the Speaker's authority being inseparable from the House itself. For example, the secret ballot election of Speaker cannot proceed unless the Mace is present. During these proceedings the Mace lies in the lower stand in front of the Table, indicating that the House is without a voice until it has elected one from among its members to be Speaker. As soon as the House has elected a Speaker, the Mace is placed on the Table indicating that the House is now properly constituted and may now conduct business.

The Sergeant-at-Arms leads the daily Speaker's Procession into the Chamber at the commencement of each sitting day with the Mace resting on his right shoulder. It is then placed on the Table, with the Prince Edward Island Shield of Arms facing upward, and is present in the Chamber at all times when House business is being conducted.

Prince Edward Island's Mace was designed and prepared by Canadian manufacturer Henry Birks and Sons Ltd. It incorporates the seals of the ten Canadian Provinces and the Coat of Arms of Canada.

On February 24, 1966, with the following words, appreciation was extended to the Canadian Area Council of the Commonwealth Parliamentary Association for the gift of a Mace to accompany the proceedings of the Legislative Assembly of Prince Edward Island.

THAT this House accepts, with sincere thanks, the generous gift of a Mace from the Canadian Area Council of the Commonwealth Parliamentary Association, as graciously presented on their behalf by the Honourable Alan MacNaughton. This beautiful emblem will serve in this Legislature not only as a symbol of the Speaker's authority but also as a symbol of those bonds of goodwill which exist between the Provinces of Canada and the Countries of the Commonwealth. It will further serve as a constant reminder of those high ideals of Parliamentary Government which we cherish. -Journals of the Legislative Assembly of Prince Edward Island (February 24, 1966) 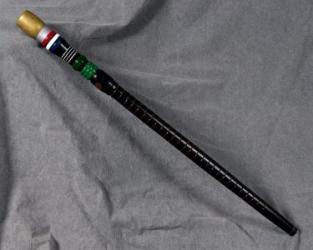 Early use of a black rod in 1348 in England suggests that it was first used to deny admission of unauthorized persons to various festivals and events at Windsor Castle. Later, its symbolism and history came to reflect an occurrence in the British House of Commons in 1642 when King Charles I stormed the Chamber to arrest five Members who opposed him but the Speaker of the day refused to turn them over.

In Prince Edward Island, the Sergeant-at-Arms carries the Black Rod when escorting the Lieutenant Governor into the Legislative Assembly Chamber during occasions such as the Speech from the Throne or the granting of Royal Assent. When providing this escort, the Sergeant-at-Arms is known as the Gentleman Usher of the Black Rod. In PEI, as in some other Canadian jurisdictions, the Gentleman Usher knocks on the doors of the Chamber with the Black Rod to seek permission for the Lieutenant Governor to enter. This symbolic act serves to emphasize that the people, and their elected Assembly, are supreme and not the Crown.

It is unclear how long Prince Edward Island has used a black rod in its proceedings.

PEI's current Black Rod is similar to others that have been used for hundreds of years in other parts of the world, but is also distinct. It is made of wood from PEI's official tree, the red oak. It has a gold band at the top representing the Lieutenant Governor of the Province, a silver band representing the Speaker, red, white and blue signifying the Clerk, Clerks Assistant and Sergeant-at-Arms, four white rings for the Pages and large and small dark green rings representing the Province and the three counties respectively.

Two Island pennies have been mounted to the Black Rod. These are the only Island coins ever minted for PEI and show on the face "Victoria Queen 1871" and on the reverse the provincial oak trees. Below this are the 27 grooves representing the 27 electoral districts in Island rust representing the colour of our soil.

The Black Rod was presented in the Legislative Assembly on 23 November, 2000. 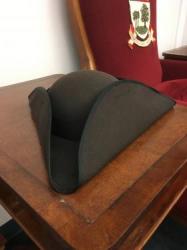 A tricorn hat is a hat with a very wide brim that has been pinned up on three sides, giving the hat three corners, or points. It is traditionally made out of black felt, and was popular in the seventeenth and eighteenth centuries, when it was part of civilian dress and military and naval uniforms.

The dignity and authority of the Speaker is reinforced in dress as well as in tradition. When sitting in the Assembly, the Speaker wears a black robe, originally in imitation of the power and authority invested in Queens' Council of the court system. The first Speaker to wear the tricorn hat in Prince Edward Island's legislature was Dan Compton, in 1979. Today the Speaker normally dons the hat upon being elected, and otherwise it rests on a small table beside the Speaker's chair. 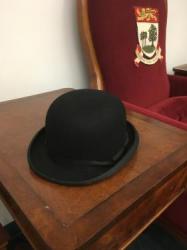 The wearing of the bowler hat is one of the more interesting traditions that continues in the Legislative Assembly today.

When a matter of money or legislation is referred to a Committee of the Whole House for consideration, the Speaker leaves the Chair and another member sits at the Table to preside over the committee. The Rules of the Legislative Assembly of Prince Edward Island formerly required each member to "rise in his or her place, head uncovered, and address the Speaker". It is possible that the tradition of the bowler hat served to remind those present in the Assembly that the Chair of the Committee of the Whole House has authority over committee proceedings.

Today, the bowler hat is not normally worn, but is placed on the Table in front of the Chair of the Committee of the Whole House. 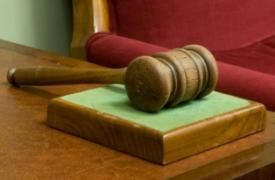 A gavel is a small ceremonial mallet used by presiding officers to call for attention or to punctuate rulings and proclamations. It is usually struck to indicate the opening and closing of proceedings, giving rise to the phrase "gavel-to-gavel" to describe the entirety of a meeting or session. The gavel is used by the Speaker and by the Chair of Committee of the Whole House.

Symbols associated with the Legislative Assembly include the Mace, the Black Rod, the Tricorn Hat, the Bowler Hat, and the Gavel.